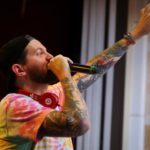 Dillon Francis has had an incredibly busy year involving his multi-genre collaborations alongside Alison Wonderland, TV Noise, also lovelytheband and performances at EDC Las Vegas, Red Rocks Amphitheatre, along with Spring Awakening. It’s been a hot minute because the producer published a brand new track but he chose to social media yesterday to declare to his millions of followers that fresh music is on its way. Dillon Francis has been teasing collaborations alongside Eptic along with Boombox Cartel during his summertime sets, so it’s potential his next release may be one of the tracks he’s already previewed. Stay tuned for updates on Dillon Francis’ upcoming music.